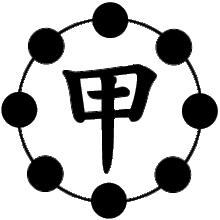 Gion was established in the Edo period (17th century), just in front of the Yasaka Shrine. The shrine’s pilgrims needed an entertainment place where they could take a rest, drink, eat, relax, and prepare for the journey back home. Eventually, geiko and maiko populated the district. Back in the Meiji period, there were 700 teahouses and over 3000 geiko and maiko at Gion. After the war, the geimaiko population shrinked to 600 and the teahouses number was reduced to 150. Nowadays (2019), Gion Kobu is inhabited by about 70 geiko and 30 maiko, and they work at 60 teahouses. Gion Kobu is divided by the Shijo street into Gion Minamigawa (historical scenery preservation area) and Gion Kitagawa (Shinbashi street and Gion Shirakawa area are treated as a traditional buildings preservation area). Gion Kobu’s geiko and maiko study the Inoue school of dance (it can be learnt only there, from the master Inoue Yachiyo) and present Miyako Odori stage performance every April, since 1872. In Autumn, they prepare the Onshukai stage dances. Gion Kobu’s crest represents a dango skewer with “Ko” sign inside.

The Gion area was closed during the II World War but resumed business operation in 1945 and Miyako Odori was resumed in 1950 at the Minamiza Theatre. The show returned later to Gion Kaburenjo, but recently it moved to Minamiza again, due to a renovation of Kaburenjo. Geiko and maiko of Gion Kobu study at Yasaka Nyokoba (八坂女紅場学園) female school of arts.