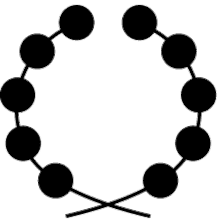 Kamishichiken is the oldest (Muromachi period) geisha district in Kyoto. It was established in front of the Kitano Tenmangu shrine (deity of study). The teahouses of Kamishichiken were built from unused wood during a renovation of the shrine. Hence the name of the district, meaning “Seven Upper Houses” (as the area is located far in the North). Sacred shrine maidens of Kitano Tenmangu used to become geiko in Kamishichiken at some point of their lives.

Kamishichiken is a part of the Nishijin district, famous for its textile crafstmanship. In the past, Nishijin was a wealthy merchant area and home for many aristocratic families of Kyoto. Naturally, Kamishichiken's teahouses were used for business meetings of the wealthy Kyoto-ites. Right now, the Kamishichiken clientele mainly consists of the older generation of customers and geiko and maiko there are proud of being especially traditional and demure.

Kamishichiken holds Baikasai tea ceremony in February, Kitano Odori in March-April, and Kotobukikai in October. There are 9 ochaya operating in Kamishichiken at the moment. It seems that there were around 50 ochaya with 60 geimaiko before the war. After the war, the number ochaya dropped to 35 (most of theme didn't re-open after the war) and geiko number dropped to 50. There was a moment in Kamishichiken's history when there was no maiko practicing in the district. Only in 1981, the debut of maiko Ichigiku marked the return of maiko to Kamishichiken.